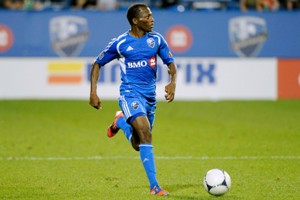 Gambia international Sanna Nyassi is the highest paid Gambian football in the Major League Soccer, according to a players’ union release.

Gambian footballers earn some of the lowest salaries in the United States according to the MLS players’ union and as it does every year, the Major League Soccer Players’ Union has released 2013 salary information for every single player in the top flight with Sanna Nyassi being the highest paid Gambian footballer.

Sanna, who plays for the Montreal Impact is the only Gambian with a six-figure pay earning a base salary of $140,000 and a guaranteed compensation fee of $147,625.

Sanna’s twin brother, Sainey, who plays for New England Revolution, makes a base salary of $88,200 with a guaranteed compensation fee of $94,950.

Defender Mamadou ‘Futty’ Danso of the Portland Timbers nets $83,000 while Vancouver Whitecaps’ teenage striker Kekuta Manneh is paid a base salary of $55,000 and a guaranteed compensation fee of $84,500.

Real Salt Lake’s Abdoulie ‘Kenny’ Mansally, who is the lowest paid Gambian in the MLS, rakes in a base salary of $50,000 with a compensation fee of $52,000. The lowest earners in the Major League Soccer make a base salary of $35,000.

Nigeria striker Obafemi Martins is the highest paid African player as well as the top earner for Seattle Sounders with a base salary of $1.6million, which places him fifth on the 2013 MLS money list.

Robbie Keane of Los Angeles Galaxy is the highest earner with a $4million salary this season. Second on the list is ex-Arsenal star Thierry Henry, who earns $3.75million. Another New York Red Bull star Tim Cahill is next with a base salary wage of $3.5million and fourth on the highest paid players list is Los Angeles Galaxy’s Landon Donovan who scoops in of $2.5million.