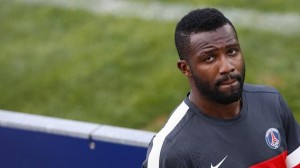 In a workforce as full of stars as the Paris Saint-Germain this season, there were very few places to take. Despite a good last season under Antoine Kombouare, the Ivorian Siaka Tiene was relegated to the stands under Carlo Ancelotti. A situation that was very challenging for the player, who has repeatedly expressed his desire to start.

After the evening of Sunday, PSG became champion of France. Tiene as well as his partners celebrated the coronation. Difficult to do otherwise despite the frustration that must be felt inside the former Valenciennes. All in all, the elephant can take comfort in being part of this great generation of the Parisian team.

Hence the tribute at a press conference of his trainer. “Before the season, we said the goal was to win the championship and go as far as possible in the Champions League. The team did a very good job. The players respected my choice, they were disciplined, professional … There were some small problems but this is the time to thank all the players. From Ibra who scored 30 goals to players such as Siaka Tiene who have not played much but were professional and serious, “said the Italian coach.

Except that the sense of professionalism is not suitable for long to Tiene, who needs a playing time to keep his place as holder in the club. A departure is not excluded. Offers abound.