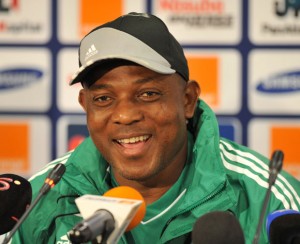 Nigeria coach Stephen Keshi assures they will make the whole Africa continent proud during the Fifa Confederations Cup next month.

Stephen Keshi is extremely confident and not shy to show it. Super Eagles coach is now getting in proper shape ahead of the World Cup qualifier against Kenya in June.

“It’s a great chance for Nigeria o play in such an important competition. We’ll do our best there to give a good image for the African football.” he told the CAF site.

Nigeria play Mexico in a friendly on May 31st before taking on Kenya on June 7 in a world cup qualifier. The Super Eagles also play against Namibia a week later as they seek a Brazil 2014 world cup ticket. Kenya forced Nigeria to a 1-1 draw in the first leg played in Calabar.

Keshi revealed he is psychologically ready for the fixtures ahead in which the team will play important 2014 World Cup qualifiers against Kenya and Namibia, the international friendly game against Mexico and the 2014 FIFA Confederation’s cup in Brazil.

“I’m always in the mood to play games, to do my job because I love doing my job and the day I stop loving it, I will definitely stop coaching,” he told Brila FM.

Nigeria will compete with the likes of Spain, Tahiti and Uruguay in Group B of the Confederations Cup which will take place in Brazil between 15 – 30 June.