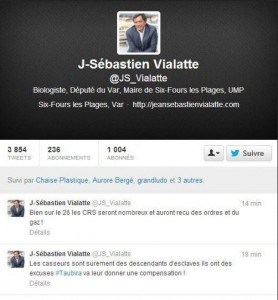 This is a new controversy twit attributed to the UMP. The Twitter account of Johann Sebastian Vialatte, UMP of Var and Mayor of Six-Fours-les-Plages, was undoubtedly one of the most visited last night after sending a comment on the behavior Of PSG breakers including parliamentary saw “probably the descendants of slaves” and admitted that “they have excuses.” An explosive tweet that the UMP punctuated by stating that “Taubira will give them compensation.”

On the web, social networks, comments and criticisms have blended. So that at about 23 hours, the famous tweet was deleted, but too late, all the media had relayed these contentious statements. Words that refer to the interview with the Minister of Justice in the newspaper of, Sunday, May 12, in which the Guyanese Christiane Taubira expressed support, overseas, “a land policy” aiming at repairing “The confiscation of land.”

Jean-Sebastien Vialatte then apologized: “It was a huge shit”, he said. “I made a stupid confusion between two things. On the one hand the challenge of Mrs Taubira on compensation of slaves, and the other, the tendency to always find excuses for breakers. I regret it. “

Some reactions on the net:

@ JS_Vialatte disappointing statement! Shame on you and all those who secretly approve!
6:05 AM – May 14, 2013
BEDINI Sebastian @ BEDINISebastien

About M @ JS_Vialatte Your statements Mr. Vialatte are unworthy of an elected official of the Republic we expect a public apology to @ ChTaubira

Shameful racist tweet UMP Vialatte speaking of descendants of slaves to qualify the breakers. No condemnation of the UMP!
10:19 PM – May 13, 2013