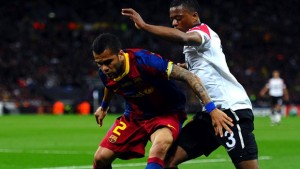 The Mercato of AS Monaco looks very agitated with rumors.

Since the formalization of the rise in League 1 of the club of the Rock, many buzzwords are advertised in the principality. Rumored to strengthen its defensive sector, ASM would be referred to Patrice Evra.

Currently under contract until June 2014 with Manchester United, the Franco-Senegalese lateral could return on the lawns with the League 1 club he knows well.

Similarly, according to information from the Spanish radio station Cadena Cope, the Monegasque leaders have made an offer to the right side of FC Barcelona Daniel Alves (30 years, 29 games in La Liga this season).

The Brazilian has a contract that runs until 2015, but would be offered a dizzying offer.

Daniel Alves has issued nine assists and scored one goal this season.