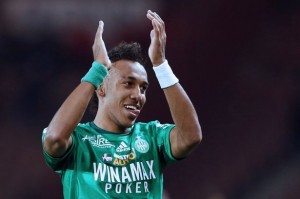 The Gabonese striker is on another dimension. He probably made his best season since the start of his career. Suddenly, the Etienne player raised the interest of several clubs in the Old Continent. The leaders of the Greens are aware that it will be difficult to keep the Gabonese Panther for next season. The player himself recently left guessing about his ambitions, confirming to have been approached by several clubs.
According to Le 10 Sport, AS Saint-Etienne has granted a release to Pierre-Emerick Aubameyang. But for Christophe Galtier, the top scorer could leave but not to any conditions.
“If we could keep him, we could have done it, said the coach of the Saint-Etienne on RMC. He has a good output. But you should respect that amount of good output. He signed a contract. “