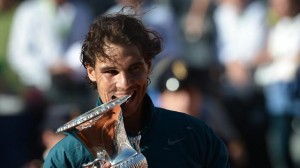 Expeditious in the final of Masters 1000 Rome which opposed him to Roger Federer, 6/1, 6/3, Sunday, Rafael Nadal is simply the best player in the ATP tour up to date with eight finals played in as many tournaments for six titles gleaned.

But the Spaniard long absent from the circuit does not occupy the first place in the ATP rankings, kept the Serbian Novak Djokovic (12310 points) hunting.

However Nadal wins a place in the new classification and found the fourth largest in the world, with 6895 points behind Andy Murray (2nd 8670pts) and Roger Federer (3rd, 8000pts). The Mallorcan will be seeded in the second Grand Slam of the season after Melbourne Roland Garros.

Jo-Wilfried Tsonga remains the French No. 1 and 8th worldwide. Semi-finalist in Rome, Benoît Paire earned ten ranks and becomes the 26th just behind the African No. 1 Kevin Anderson, 25th, who earned two rows with a total of 1420 points and a gain of 80 points after the knockout stage of the Roman ocher surface. The second African in the Ranking  Malek Jaziri (Tunisia) points to the 158th rank. The South African Rik de Voest, ranks 163rd.