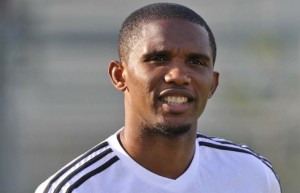 Samuel Eto’o is already the highest paid player in the world. With an estimated 20 million Euros per year fees, the Cameroon star dominates the rankings. But this figure could rise if he signed a new contract with the Russian club Anzhi Makhachkala.

While his current contract ended in June 2014, Eto’o could negotiate an extension. This implies a wage increase. Anzhi vegetating in the depths of the rankings in the Russian league will play next season its second European Cup finals thanks to Samuel Eto’o.

The former Barcelona player has lately kicked into touch any possible return to Inter Milan: “I’m ready for the new season with Anzhi, he said in the columns of Sport-Express. All I want is to finish my career here; I’m doing really well and I am going nowhere! “