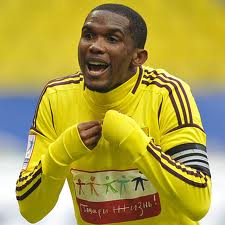 Samuel Eto’o and Anzhi Makhachkala will be content with the Europa League next season. Dagestan club with a (2-1) win on Monday against Lokomotiv Moscow in the 29th and penultimate day of the Russian championship definitely occupies the 3rd place. Led on score in the 32nd minute, the club of the Cameroonian returned to score with a goal against his side 6 minutes later. The Indomitable Lions captain has put his mark on the game by scoring his goal in the 74th minute.

A 2-1 victory that allows Anzhi to consolidate its third place behind champion CSKA Moscow with 64 points and Zenit St Petresbourg 61 points. 4th place is provided by the 48 points Spartak Moscow and FC Kuban closes the top five with 48 also.

More important issues in the last day. Are also known the clubs that go down to a lower division. This is Mordovia Saransk and Alania Vladikavkaz