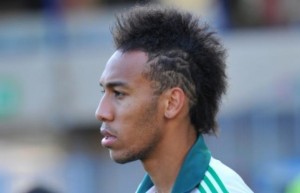 Author of a remarkable season with Saint-Etienne, Pierre-Emerick Aubameyang won the Marc-Vivien Foe RFI-France 24 of the best African player evolving in Ligue 1 for the 2012-2013 season.

With 19 goals and 8 assists in the Championship, the Gabonese striker is at the top of his art from the beginning of his career. The Gabonese panther aged 23 is coveted by great teams of the European football. Etienne could be the hit in the summer transfer market.
Crossing the land of honest men, the chief executive of the ASSE, Roland Romeyer spoke of Aubameyang in the Colums of the Burkinabe daily Sidwaya and relayed by Le 10 Sport:
“The only one who has a good output, Pierre Emerick Aubameyang with whom we maintain a very good relationship. He is an extraordinary kid. The problem is that he has grown up since he was with us and is fancies by clubs that will promise him a career superior to ours. So we will see the proposals during the transfer window, “said Roland Romeyer in Sidwaya.
“We must be sure of one thing; we will not sell all our staff to replenish our funds. But if we want to continue our progress next season, we should keep our good players and replace those who are leaving, because in my opinion, there may be three or four players leaving. It may be Aubameyang in case of important proposals. Others, it is because we want to part so we will find solutions, “says the president.