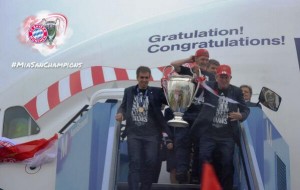 Bayern Munich returned to Munich on Sunday after winning Saturday’s coronation in the Champions League against Borussia Dortmund.

The team coached by Jupp Heynckes landed in Bavaria this afternoon with on board a very special passenger: the trophy of C1.

This is the happy Bayern coach and captain Philip Lahm who came out the plane first holding the trophy facing the fans who await the return of their team yesterday. A triumphant return in all!

The party is beautiful. But beware; Bayern has warned that there will be no big celebrations. In anticipation of the German Cup on June 1. The opportunity to make a historic triplet!