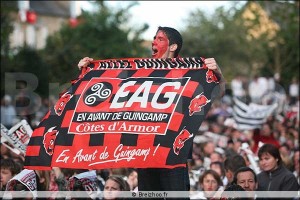 After the celebration of the accession in the Cotes d’Amor, Didier Drogba has welcomed the return among the elite of his former club via Instagram social network: “Congratulations to my former club for the rise in Ligue 1! After nine years the farmers are back! “

The Galatasaray striker had changed the colors of Guingamp during the 2002-2003 season, before being transferred to OM. He scored 24 goals in 50 games with En Avant.