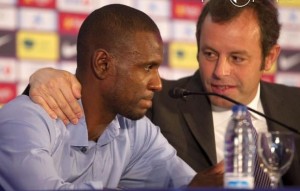 End of the “historiade amor” between Eric Abidal and Barcelona.

After six years in the blaugrana colors and a heroic battle against the disease, the player originally from Martinique announced last Thursday that he was leaving the Catalan club.
The Barcelona president, Sandro Rosell, has paid tribute to him :
“He is a very special person to us and all our supporters. Eric won our heart. He showed us that you should never admit defeat. Thanks to his will, he overcame all difficulties. He gave us a life lesson. “