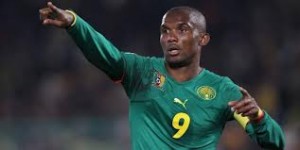 Samuel Eto’o and his teammates are competing in June, three games, a friendly match on June 1st against Ukraine, and two playoff games of the World Cup Brazil 2014. Concerning the friendly, many frames of the Indomitable Lions will be absent.

Starting with Captain Samuel Eto’o who will play the final of the Cup of Russia. Chjarles Itandje continues with his club Paok , theThessaloniki playoffs until June 2. His club sent a fax to mean the absence of goal on June 3.

The Cameroonians evolving in Spain are required to finish the season on the last day the next weekend with their respective clubs. It is about Alexandre Song, member of Barcelona and Allan Nyom player of Granada.

The last player to be out for this friendly match is on the left side of the Spurs Benoit Assou-Ekotto. He has contracted an injury during the tour of Tottenham against Jamaica. He will nevertheless be present against Togo.

Leader of Pool I, Cameroon will face Togo on June 9 as part of the 4th day and DR Congo in the fifth day the World Cup 2014 playoffs.