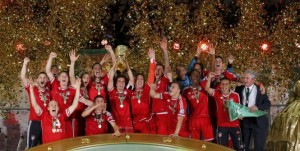 Bayern Munich achieved it! It has won everything this season! In other words, the three major titles!

Yesterday Bayern won the German Cup at the expense of Stuttgart 3-2. A goal from Thomas Muller and a double from Mario Gomez were enough for the happiness of the Bavarians. It was the last meeting of Jupp Heynckes at the head of the team. Stuttgart tried to get back in the game by reducing the scoring with a double from Harnik.

The win concluded a great season of Bayern which has already won the Bundesliga and the Champions League against Borussia Dortmund.

Here’s the video of this historic treble.

Franck Ribery is on a cloud! “It’s amazing what we achieved this season. This is historic. A triple is great. We just celebrated after the Champions League but we had to stay focused for the last game. It was not easy. Now we can really celebrate! “