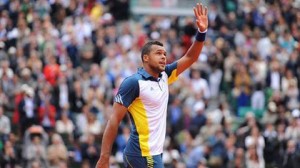 Jo-Wilfried Tsonga faces Roger Federer on Tuesday for a place in the last four in the international tournament of France. The French number one will be hard to cope with the Swiss champion. But for Guy Forget, the captain of France tennis team, the Franco-Congolese has his chances of qualifying.

“For the first time, Jo arrived at this stage of the competition with a huge capital trust, optimal fitness. He spent some time on the field. Public support, the experience of years of practice here at Roland Garros, the experience of last year against Novak Djokovic, a reference match even if he lost with three match points-, all is available for him to make a great match, “said Forget in the statements relayed by Le 10 Sport.

“We saw him in the previous round against Gilles Simon. An incredible first set, following two sets where he was sometimes a bit ghostly and then behind he was able to raise his level of play. it will be a different match against Jo. Both players will go forward and practice an attacking tennis for the pleasure of 15,000 people who will be there. Everyone expects this game for a long time which is finally here. They are positioned at their places. I feel that we will enjoy it! “