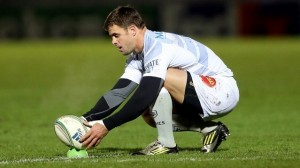 It is a magnificent season for Rory Kockott with the Castres Olympique. Champion of France Top 14, the South African scrum-half who has desires elsewhere, also ends this year’s championship as best scorer.

With his 13 units recorded in the final, he totaled 376 points to his counter and the classification opener ahead of the European champions, Jonny Wilkinson. The English CTN scored 373 points during the season 2012-2013.The Welsh Perpignan James Hook, finished third with 265 points.

In the trials classification, it is the Fijian winger of Clermont Napolioni Nalaga who ranked first with 13 trials scored in 20 games. His teammate Wesley Fofana ranks second with 10 trials. Vincent Clerc of Toulouse rises on the third step of the podium with 9 trials.