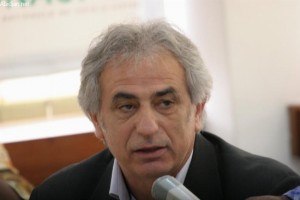 Algeria begins in the most beautiful way its preparation for the qualifiers for the 2014 World Cup. In a friendly against Burkina Faso, the Desert Foxes defeated the Stallions (2-0) last weekend. If the coach Vahid Halilhodzic of the Greens welcomed this victory, he recognizes that there are improvements to be made before games against Benin and Rwanda on 9 and 16 June. The Bosnian technician recognizes that he has not yet found his type team.

“I think this is a win deserved. We have not well started the game and we had to make some settings for the machine to be oiled. My players are to be commended for their efforts against a team that has not usurped its second place at the last African Cup of Nations in South Africa. We could have won with a bigger score, given the many missed opportunities especially in the second half. This means, it remains a good review for us before the two complicated trips in Benin and Rwanda (June 9 and 16 respectively, ed.). I tested a formula for the next match against Benin, aligning Medjani as a regulator in the midfield, while the other two players in the midline, Guedioura and Taider play a step ahead. In attack, I opted for three classic strikers, but I do not know if I will make the same experience next Sunday. It’s not easy to win in black Africa, especially against an athletic team of Benin, which will certainly play all out against us. We are warned, especially since statistics show that the Algerian team has often difficulties to win outside. I have not yet decided on the workforce that will be aligned in the next game and it will take me a lot of time thinking of what to do, given the importance of the appointment. “