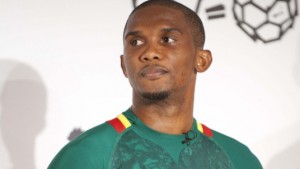 As we announced last Sunday, Samuel Eto’o will not be present on June 9 against Togo in 2014 World Cup qualifying. The Cameroonian striker injured in the thigh with his club Anzhi in the final of the Cup of Russia he lost against CSKA Moscow, declared package.

FECAFOOT through its coach Volker Finke confirmed on Tuesday, the withdrawal of the star of the Indomitable Lions. Nevertheless, the German technician hopes to recover his captain for the match of the 5th round of the qualifying against DR Congo. “Eto’o was recommended by his club to rest for a few weeks. So he will probably miss the game in Lome. But I’m sure he will be present for the match against DR Congo, 16 June in Kinshasa, “said Finke. Samuel Eto’o was on Monday in Yaounde to cure his injury by the medical staff of the Indomitable Lions.