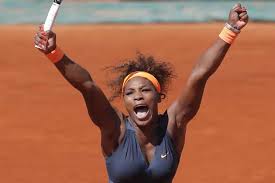 The second semi-final of women’s singles at Porte d’Auteuil has turned into a Correction. Serena Williams dispatched Sara Errani in two quick sets 6/0, 6/1.

The Italian seeded No. 5 has taken only a stake in this folded poster in 46 minutes. And it took until the tenth game for her to be able to pull her one-sided only stake in this encounter. Serena qualified to her 20th Grand Slam final. The World No. 1 will attempt to win her 16th Grand Slam singles title on Saturday against Maria Sharapova, the World No. 2.

The Russian defending champion, Maria Sharapova has at her side had troubles before qualifying to the final. She will have to produce a great game to stop the American who is on a run of 30 straight wins.