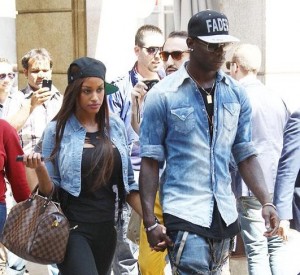 After a break of one month, love seems to be back between Mario Balotelli and Fanny Neguesha. After being reconciled with his girlfriend, the Italian-Ghanaian striker has decided to switch to the higher speed. According to The Sun, the famous football player would have made his marriage proposal to Fanny Neguesha. The sweetheart of Balotelli could post a photo on Instagram of the ring her husband gave her writing: “It’s official.”

According to the British newspaper, the jewel would cost the trifle € 100 000, adorned with a huge diamond. “Mario and Fanny had already talked about getting married but this time it’s for real, confirmed a close friend of the British newspaper. He made his request and she gladly accepted. Now they will go on vacation and will begin to prepare for the big day. “