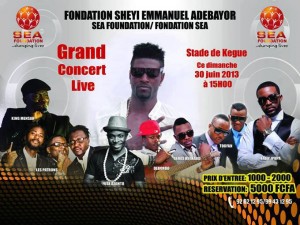 For the launch of his Foundation, Sheyi Emmanuel Adebayor, the Togolese striker, provides with his communication cell, a giant concert on June 30 in Lome.

The flyers of this musical event are visible a few days ago on social networks.

Togolese artists such as Toofan and King Mensah are announced. As well as Debordo, the Patrons and Serge Beynaud of Côte d’Ivoire. Fally Ipupa of Congo will also be present. As a big fan of the concept Azonto, Adebayor did not fail to invite Fuse of Ghana.

All the incomes from the concert that will take place at the Kégué stadium in Lome will be donated to the SEA Foundation for making charities in Togo. A football game with a few stars of the continent is also planned.

The official announcement of this event will take place in the coming days.