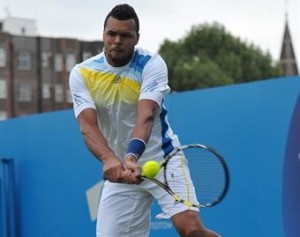 Passed the frustration of his semi-final at Roland Garros, Jo-Wilfried Tsonga is back on the grass on Thursday.

The French, World No. 7, this time was struggling with his compatriot Edouard Roger-Vasselin in the second round of the Queen’s. It took three sets to the seeded No. 4 to dismiss the 66th player in the ATP, 6/3, 6/7, 6/3.

A break was enough for the Franco-Congolese to clinch the first set in 29 minutes. The next round is played. Both men are masters of their services and must decide the decisive games.

Tsonga bowed 7-2 after 48 minutes. Pushed, the No. 1 French took the first service of Roger-Vasselin and manages his break to finish the match on a set identical to the first 6/3.

Jo-Wilfried Tsonga has thus qualified for the knockout stages of the tournament. He will play the ticket to the quarterfinals against Dutchman Igor Sijsling this afternoon.