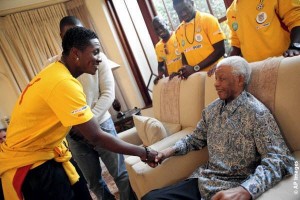 The former South African President, Nelson Mandela is being treated for six days in a private hospital in Pretoria at 94 years for a lung infection.

This disease cost to the Nobel Peace Prize in 1993 four hospital stays within two and a half years.

At last, Mandela is doing a little better.

Africatopsports offers this picture of the day, a nod to Nelson Mandela: The Black Stars, led by Asamoah Gyan, had met with the former South African president at Afcon 2013.