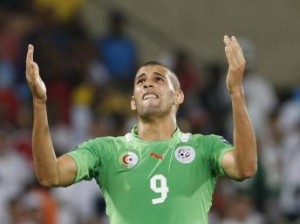 Fifa has appointed Asamoah Gyan best player of the playoffs of the World Cup Brazil 2014. Although Ghana (not yet qualified) plays its final group against Zambia during the last day of the qualifying for the tournament, the player has broken all records this season.

He is the current top scorer of all time in the selection of the Black Stars and also top scorer in United Arab Emirates.

After 5 days of the playoffs, the former Rennes player has scored 4 goals and is not far from the top scorers. They are three to chase the title of top scorer, the Algerian Islam Slimani, the Egyptian Mohamed Salah and the Ethiopian Getaneh Kebede each scored five goals in five days, or one goal per game.

Islam Slimani (in picture) evolves in the Algerian championship with CR Bélouizdad. Despite the plethora of the Algerian players playing outside, the Franco-Serbian Vahid Halilhodzic put all his trust in Slimani which also gives him reason. With this performance, the player is asked by Troyes in Ligue 1 in France. He is tracked by other clubs in Ligue 1 and of course the Middle East.

Left attacking midfielder of FC Basel in Switzerland, Mohamed Salah is no longer to introduce. Named “Picasso” for his great technique, the player shines in the selection as in the club. Co-leader of the current top scorers of the playoffs, he is launched to compete in the World 2014. He has participated this season with his club in the final of the Europa League.

If Ethiopia has qualified for the third and final round of the qualifying for the 2014 World Cup in Brazil waiting for the investigation of the FIFA, it is partly thanks to Getaneh Kebede. Young, but large in talent, the top scorer in Ethiopia is only 21 years. He evolves in Ethiopia especially with Dedebit and will soon hit the big doors of European clubs.

Here are the top scorers of the 2014 World Cup qualifiers: