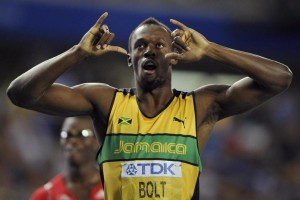 After having won the 200 meters at the Oslo meeting in 19″ 79, Usain Bolt was last Thursday, on the start line for the 100m semi-finals of Jamaica.

The double Olympic champion and world record holder in the distance easily obtruded in 10″ 00 with a total relaxation.

Bolt controlled the race, ahead of Jason Livermore and Jacques Harvey, both in 10 “07.
In the other series, Asafa Powell, after some problems on the hamstring has, without forcing on the last thirty meters, dominated his group. He easily won the race in 10 “02. “First race for almost a year, I felt good”, he said. “It was easy. “