Born on June 25, 1987 in Cannes, Sandrine Gruda is a female basketball player of French nationality. She is the daughter of Ulysses Gruda, an interior of 2.07 m and selected seven times for the team of France.

Champion of Europe (Euroleague) in 2013 with UMMC Ekaterinburg, she evolves like her mother at the center and measures 1.93 m.

With the Blues in 2012 she won the first Olympic medal for France (editor’s note, beaten in the final by the USA) and the group received the nickname of Braqueuses. It is on the way to her second title of European champion in Eurobasket. Host of the competition in 2013, France is the favorite in the championship and remains faultless before tackling the quarterfinals.

It is on her homeland, Martinique, that the French interior teaches the fundamentals of the orange ball to the Golden Lion Basketball and Pole Espoir. In 2002, she returned to the metropolis. Three years after a stint in the federal sector, she is committed to Valenciennes (2005), at the age of 18. She very quickly became popular in the paint and led the following year, the USVO in the Euroleague final four. Valenciennes is eliminated in the semifinals. Twice MVP of the national championship, she is enlisted by the Russian club UMMC Ekaterinburg in March 2007, then draftee in the 13th position in April of the same year by the club of the Connecticut Sun in the WNBA draft in 2007. She played the WNBA for three seasons (2008-2010).

The match France-China August 5, 2006 in Dunkirk marks her debut with the first team. She is selected in the same year for the world championship in Brazil.

At the Olympic Games in London in 2012, she finished as best blocker with an average of 2.1 shots. 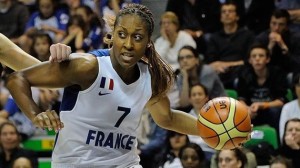 In 2010, the beautiful Martinique lends her image in an advertising campaign for Air Caraibes airline.

She also scrolls as a model.

Champion of Europe 2009 in Riga (Latvia) 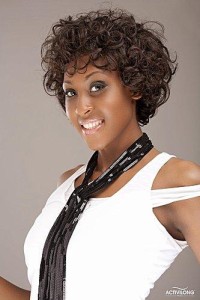 UMMC Ekaterinburg
Winner of the 2013 Euroleague

Winner of the Coupe de France in 2007

Finalist of the Coupe de France in 2006 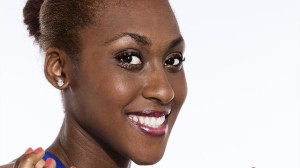 Knight of the National Order of Merit in 2013

Best interior in the European Championship 2009

Selected by FIBA Europe All Star Game in 2007

Best interior in the European Junior Championship in 2004

Best interior in the European Junior Championship in 2005