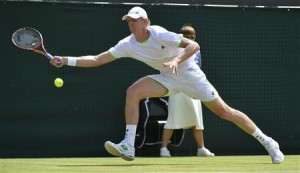 Kevin Anderson is still cannot defeat Tomas Berdych. The South African will not be on track for the second week of Wimbledon.

He was dominated with 3 sets to 1 in the third round of the Grand Slam London on Saturday.

After a first set well controlled and won 6/3 in 33 minutes of play, the seeded No. 27 conceded the second set by the same score. In the third round, Berdych (sixth player in ATP) takes the first two services from Anderson (23rd worldwide) [0-3]. The African tennis No.1 is back in stride 2-3.

But the Czech retains a break ahead to win 6/4. In the fourth set, Anderson to break Berdych 4-2, but will eventually bow 7/5. The Seeded No. 7 Tomas Berdych is therefore imposed with 3/6, 6/3, 6/4, 7/5 2:56 and qualify for the knockout stage where he will crosse the racket against the Australian Bernard Tomic on Monday.

Also note the authoritarian victory of the world No. 1 Novak Djokovic. The Serb, who won Wimbledon in 2011, dominated for the seventh time the French Jeremy Chardy, 6/3, 6/2, 6/2.