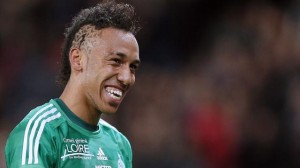 Pierre-Emerick Aubameyang approaches increasingly Borussia Dortmund. The transfer of the Gabonese international is taking shape. According to Sky Italia and La Gazzetta dello Sport, the player should take the lead in the Bundesliga. La Gazzetta dello Sport announced an agreement between Dortmund and Saint-Etienne for the transfer of the Gabonese panther, for about 15 million.

To believe Sport365, it is only a matter of details to see the the Gabonese international evolving in Borussia Dortmund next season. Aubameyang, out of a great season in L1 with the Greens (19 goals in 37 games), unless a turnaround, will know the atmosphere of the Signal Iduna Park and its famous yellow wall.