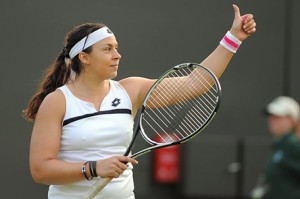 Mario Bartoli outclassed Kristen Flipkens in the semifinals of Wimbledon. As in his previous matches, the French, seeded No. 15 folded the meeting in two sets. She swept in just an hour of play (1h 03min) the Belgian World No. 20 6/1, 6/2 on the Centre Court.

For the second time in her career, Bartoli will play a Wimbledon final after 2007.

Self-possessed to find the Top 10 of the WTA next week, the No. 1 French women’s tennis will attempt Saturday to brandish her first Grand Slam title. She will cross the racket for this purpose against the winner of the match between Agnieszka Radwanska [N.4] and Sabine Lisicki.