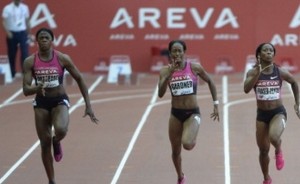 The horses were released on Saturday in the 100m of the meeting of Saint-Denis Diamond League. The Occupiers of the podium have simply done their best times of the season.

Shelly-Ann Fraser-Pryce, dominated by Blessing Okabgare in the 200m during the stage of Birmingham, took her place in the 100m.With a time of 10” 92 Olympic champion Queen distance ahead of the Nigerian Okagbare one hundredth. The Ivorian Murielle Ahouré ranks third (11” 01) two-hundredths of her personal best.

Despite having also achieved her best time of the season, 11” 32, the Franco-Mauritanian Myriam Soumare finished at the last place in the race.