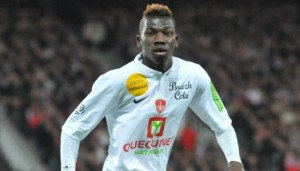 Relegated to League 2, the Stade Brestois loses its players. Paul Baysse announced in Saint-Etienne, Benschop loaned to Fortuna Dusseldorf, it is Adama Ba who has just terminate his contract with the club of Finistère. The announcement was made on the team website.

The Mauritanian striker of 19 years joined Brest in 2010 and signed a professional contract with the club in 2012. Last season, he played 15 games in League 1 with no goals scored.