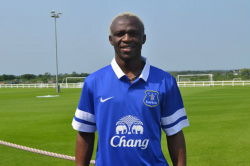 All is well for Aruna Kone. The Ivorian striker has just signed in the English club Everton for three years. A transaction in the program since Wigan’s relegation to the second division (Championship) and the departure of his coach Robert Martinez among the Toffees. The amount of the transaction was not disclosed.

Aruna Kone joined Wigan a year ago only coming from Levante in Spain. Aged of 29 years, the elephant has played with Lierse in Belgium, in Netherlands with Roda JC and PSV then in Liga with Sevilla. With 13 goals last season in the colors of the Latics, he contributed to the victory in the FA Cup against Manchester City. Kone will join his new teammates later in the month after enjoying a few days vacation more because of his participation with Ivory Coast in the World games in 2014.