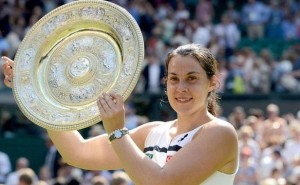 Marion Bartoli, Kaia Kanepi, the most notable progressions of the new WTA ranking. The intractable French during Wimbledon found the top 10.

Winning her first major title, Marion Bartoli earns 1,900 points and ranks 7th in the world, her highest ranking on the circuit. Eliminated in the quarterfinals by Sabine Lisicki (finalist ranked 18th Worldwide), the Estonian Kaia Kanepi makes a 22 bond jump to be ranked 24th.

Stripped of her title and eliminated in the second round, Serena Williams (-1720 points) stands firm in place worldwide first place. The American is ahead with over 2,000 points, her new runner Maria Sharapova. Sloane Stephens (16th) stopped in the quarterfinals by Marion Bartoli, advances with a step.

Only African in the top 100, the South African Chanelle Scheepers (world 69th), beaten in his first match on grass at Wimbledon, loses two steps. She is far ahead of her compatriot Chanel Simmonds who regresses by nine spots and ranked 173th. The two South Africa are the only African ranked among the top 200 on the WTA circuit.