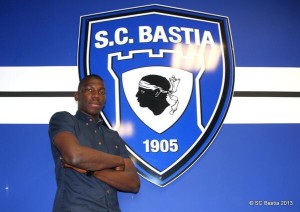 Only 24 hours after canceling his contract with Stade Brestois, Adama Ba has signed with Bastia. The player “has committed to three years with the Sporting Club of Bastia. Just arrived in Britain, he has passed a medical examination and will make the oxygenation stage in Vezzani “, the Corsican club announced on its website.

The young Mauritanian midfielder remains in League 1 despite Brest relegation. Ba joined the club of the Finistère in 2010. He starts with the U-19 team and that of CFA2 (8 games, 1 goal in 2010-2011). In 2012, he played with the team CFA2 and registered seven goals in 11 games while playing a semifinal with the U19 in the Gambardella Cup against Saint-Etienne.

The elapsed season, the Mourabitoune played 15 games in the elite. This is the sixth recruit of Bastia after Modesto, Raspentino, Keseru, Diakite and Bruno.