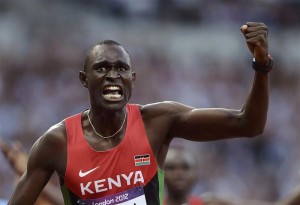 David Rudisha may not participate in the world championships in Moscow in August. The king of 800m is not part of the Kenyan selection unveiled Sunday.
Due to a knee injury, the 2012 Olympic champion, world defending champion and world record holder in the 800m did not participate in the national qualifications. An injury incurred since May. However, the leaders of the Kenyan federation still give a week to decide whether Rudisha will be present or not in Russia (10-18 August).