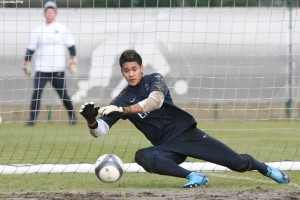 France is sacred world champion (Cadets) after a final ardently fought with a strong Uruguay team to the end. The Blueberries owe their victory to the porter Alphonse Areola who won in penalty shootout (4-1). The young goalkeeper of PSG was also remarkable in the semi-final against Ghana. Areola expressed to the website foot01.com his feelings after the final victory.
“This shoot on goal, what better … Stop the first two, there is nothing better for the team. It is a feeling of pride and satisfaction. We showed up in this meeting. We will come back with the World Cup at home. We see our team scrolling. We are rewarded by our title, it will be engraved on all our lives and people will talk about it in the future, “he said.