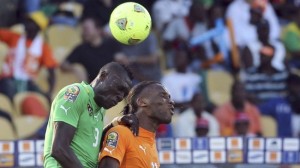 Asked about his transfer window, the Togolese international defender Vincent Bossou (here duel with Didier Drogba during the Afcon 2013) suggested to our editorial on Sunday that he is still playing in Binh Duong club evolving in the V-League in Vietnam while he was the target of Kuwaiti clubs.
“I’m still in Vietnam. I almost finished and I have time to reflect on my new destination, he said. For Kuwait, my club refused”

Aged 27, the former player of Etoile du Sahel 15 caps with the selection of Togo. Bossou Vincent had left Navi Bank Saigon to Binh Duo last November for a period of two years.