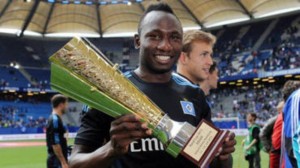 Jacques Zoua lifted his first trophy of the season after the victory (2-0) in Hamburg in the North Cup final against FC Copenhagen, Danish champion. It is a traditional preparation competition of the season.
The goals were scored by Marcell Jansen and Michael Mancienne. The Cameroonian international could even improve the scoring if he had not missed a goal after a volley.
The third place is occupied by Brunswick; clubs promoted to the Bundesliga this season, thanks to its 2-1 win against Wolfsburg.