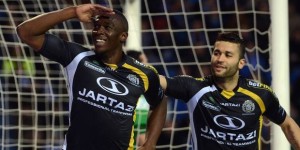 Benjamin Mokulu is not one to waste time. The Belgian attacker of Congolese origin (DRC) has quickly highlighted himself with his new club FC Malines. After having signed with the club few days ago, the former Lokeren player announced he wants to focus on his work. And we can say that the Congolese did not take much time to make a name of his own. He scored his first goal during the friendly match against FC Malines at Ujpest.

“Scoring a goal is a good way to celebrate his arrival. I noticed that I had a little delay at the physical level. But there are still two weeks before the start of the championship. Sunday we will play against Bordeaux and hopefully I’ll be in the team that will start the meeting, “said Benjamin Mokulu to Het Nieuwsblad.