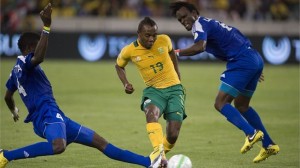 It is today that will be played the semi-finals of the Cosafa Cup. A competition for national teams in South Africa. A poster, a shock worthy of a final event. Zambia, the hosting country welcomes its South African neighbor. For Hervé Renard, Chipolopolo coach, his team is favorite and he considers nothing but victory.

On the other hand, Gordon Igesund, though deprived of some best features selected by the biggest clubs in the country (Kaizer Chiefs, Orlando Pirates) for different maturities, the group provided enough. Moreover, the Bafana Bafana did not have a lot of trouble in the last round to qualify. A logic 2-1 win over Namibia. So optimism is also needed.

The other semifinal pits the Zimbabwe to Lesotho. A team Lesotho winner of the quarter-Angola, another great nation in the region. The match therefore remains very open.
Program
15h Zimbabwe- Lesotho
18h Zambia – South Africa