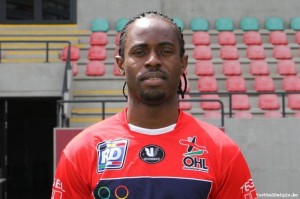 The Nigerian striker, Derick Chuka Ogbu leaves the Jupiler Pro League for the Romanian championship. The player, commonly known as Chuka evolved last season in Oud Heverlee Louvain. The Nigerian now joined the CFR Cluj. The player has signed a contract for three seasons with his new club.
Chuka arrived at Louvain in 2011 from Umm-Salal, a club of Qatar. In two seasons with those of University, he played 53 matches and scored 20 goals.
The 23-year-old joined a club that was three times champion of Romania and played the European Cup five times in the last six seasons.

Last season, the club of Transylvania finished in a disappointing ninth place in the championship and was beaten in the final of the Romanian Cup.