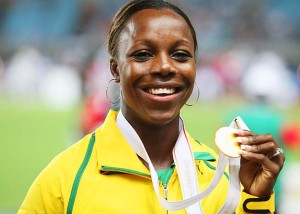 Born on 15 May 1982 in Trelawny, Veronica Campbell-Brown is part of the elite athletes of Jamaica. The sprinter was happenen to be remarkable at the University. Her first major competition at the time was the World Junior Championships in Annecy (1998) where she finished sixth in the 12s 04.

The Following year she improved her performance and won the 100m final of the 1999 IAAF World Youth Championships. In 2000, Veronica Campbell was the only athlete to win the 100m and 200m in the same edition of the World Junior Championships in Athletics.

In 2004, the Jamaican athlete is crowned Olympic champion in the 200 m ahead of the American Allyson Felix in 22 s 05.

In 2005 she ranked second in the 100m at the World Athletics Championships in Helsinki. The same year, she is sacred vice world champion in 4 × 100m relay.

Veronica Campbell-Brown won the 2008 Olympic title in the 200 m in 21 s 74 Games of Beijing. The world vice champion in the 200m (2009) won in Doha the following year’s world championships in room.

A career destroyed by doping?

Veronica Campbell-Brown tested positive on May 4 at the Jamaican Invitational Meet in Kingston. A diuretic, Lasix, All which is a masking product was detected in the Withdrawals made on the sprinter. The results of this analysis undermine the career of the athlete temporarily suspended. She will not attend future meetings, or even less to Jamaican selections at the world championships in 2013.