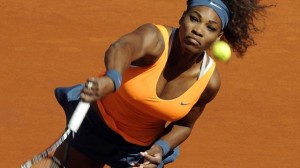 Sportswoman of the Year at the ESPN Awards, Serena Williams made her second outing on the Bastad court on Thursday. The American conceded more games than the first game, but spent less time on the clay of the Swedish tournament.
Within an hour of play, the seeded No. 1 folded the meeting pitting her to her Georgian opponent Anna Taishvili, 6/2, 6/3.
She will play in the quarterfinals the Spanish Loudres Dominguez Lino, winning three set to the Brazilian Teliana Pereira 3/6, 6/4, 6/3.
Also note the qualification of the Italian Flavia Pennetta by getting rid in the third set of the Romanian Simona Halep. The seeded No. 2 led 2-0 in the final round (4/6, 7/5, 2-0). She will face in the quarter, the French Virginie Razzano.