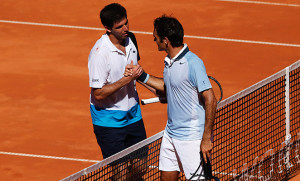 Roger Federer will not brandish his second title of the season on clay in Hamburg. The world number five who was back in the tournament since 2004 was eliminated in the semifinals by the Argentine Federico Delbonis on Saturday.
Delbonis, 124th in ATP, has been unapologetic in his first match against the former world No. 1 to win two sets in the tiebreak, 7/6 [9-7], 7/6 [7 -4].
After losing the first set, the Swiss, seeded No. 1, fails to make a difference in the second round. In all four [4-4] in the tiebreaker, Federer commits three unforced errors and tilts after 1hr 52 on the Center Court.
In the final, Federico Delbonis will make an attempt to win on Sunday, his first title on the ATP tour against the Italian Fabio Fognini head of Series No. 12, winner in the other semi of the Spaniard Nicolas Amagros.