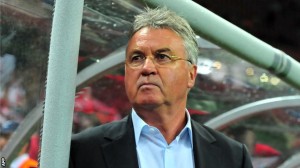 Anzhi Makhachkala has no coach. The Dutchman Guus Hiddink resigned on Monday. If nothing has filtered out the reasons for the resignation, no doubt that the start of the season reeling for the Dagestan club has probably something to do with it. In two games, Anzhi has only had one point and often missed its meetings in the final minutes.

During the first day, it’s Eto’o who missed a penalty and Friday a defeat against Dinamo Moscow with a goal from a penalty spot in the 90th.

It is another Dutchman Rene Meulensteen, former deputy of Sir Alex Ferguson at Manchester United, who becomes the coach of the club where other Africans such as the Congolese Christopher Samba, the Ivorian Lacina Traore and the Moroccans Mbark boussoufa and Mehdi Carcela evolve. Hiddink has been linked with PSG this summer before extending a year.

This is the crisis at Anzhi. Eto’o himself is no longer unanimous. A few weeks ago, his leaders asked him to reduce his salary for an extension.