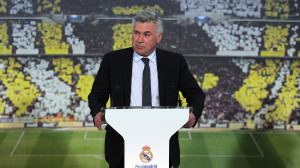 Carlo Ancelotti does no more want reinforcements in Real Madrid. After closing the door to Zlatan Ibrahimovic, the merengue coach ends any movement of his club. “I have quality players with personality. I am delighted to lead them. We do not need to recruit other players, “Ancelotti told the Madrid press AS.

The former coach of PSG intends to keep Gonzalo Higuain “I think now we must speak of Higuain as Real Madrid player … I spoke with him this week. This is a Real Madrid player and while we do not have new information, we must consider him as such and I wish he remains among us. “However nothing says Higuian, scorer for the first match of Carlo Ancelotti on the bench of Real, still wants to stay.

The Argentinian, announced in the viewfinder of Naples, had publicly expressed a desire to leave Real last season.