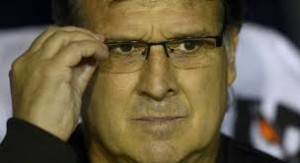 What a surprise! The biggest names in football have been circulating. Finally, the new coach of FC Barcelona as the Africa Top sports.com reported is Gerardo Martino, nicknamed”Tata”! The successor of Tito Vilanova is announced in the next few hours in Barcelona. Gerard Martino has reached an agreement with the Blaugrana on a 3-year contract according to the Spanish press.

Once again, the voice of Lionel Messi focused on this issue as already announced by Africa Top Sports. The Argentinian had already trained Messi in the formation of Newell’s Old Boys.

The names of Rubi, assistant of Vilanova, Luis Enrique, Marcelo Bielsa had been announced in the locker room in Catalonia.

“Tata” is however completely unknown in Europe. And the choice of the Argentinian hosts many forums worldwide. Some find very curious that choice.

Gerardi Martino became well known in Paraguay, where he won numerous national titles and where he mostly led the national team for four years (2007-2011).

He is also from Rosario, the birthplace of Lionel Messi.

He will have to convince and very quickly!