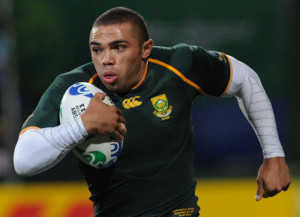 The star rookie of RC Toulon Bryan Habana (1.79 m, 92 kg) is expected on the Var harbor on Tuesday as announced Provence. The South African winger had confirmed his departure from the Stormers (Team Cape Province) in January. He is committed for the next two years with the European Champion.
At 30-year, Habana three times best South African player (2005, 2007 and 2012) – is going to discover a new championship. 2007 world champion-best player in the world in the same year-IRB, Bryan Habana (86 caps and 50 tests for the Springboks) will be officially introduced on Thursday. He will find on the Rade his compatriots Bakkies Botha (second line) and the third lines Danie Rossouw and Joe Van Niekerk.
Apart from Habana, the vice France Top 14 champions will introduce the on the same day another rookie champion of the world: New Zealand’s second row Ali Williams (world champion with the All Blacks in 2011). Toulon will also unveil this Thursday, July 25 its new jersey.