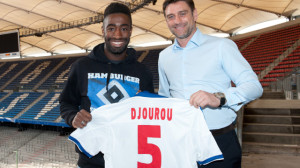 Arrived in Hamburg this summer, Johan Djourou could miss the first game of his club. The Swiss defender was operated in the groin on Tuesday.

Loan from Arsenal, Johan Djourou (central defender) should not be sufficiently recovered from his groin operation for the first round of the German Cup on August 4 which opposes Hamburg to Schott Jena.

He will also be doubtful for the curtain of the Bundesliga. Thorsten Fink and his men will be at that time confronting Schalke 04 on 11 August.